Think Twice Before You Use Subs or 1099’s Who Can’t Speak English; Here’s 2 Simple Reasons Why

The government has recently been cracking down on improper classification of workers as subcontractors.  Understanding the difference, at least in the eyes of the government, can help a remodeler avoid challenges as well as the fines and penalties that come with misclassification.  I recently became aware of an additional consideration as a result of reading an article in Remodeling magazine titled “Se Habla Ingles + No = No Deal? Get Real!”   After reading the article, but particularly the reader comments, that new consideration jumped out at me.  Using subcontractors and or 1099 workers who do not speak English can put your remodeling business at risk in at least two costly ways.

#1: Customer service can be compromised leading to loss of repeat work and referrals.

Let’s face facts here; if a worker cannot speak English there will definitely be communication challenges.  This is clearly demonstrated by the comment left at the article I mentioned above.  The comment was by Perry, an actual consumer who personally experienced the challenges and disappointments caused both by the workers who could not adequately understand English as well as the business that hired them:

“It's difficult to quantify or fully explain in this comment the magnitude of problems we've had on our current job, but approximately half the problems can be traced directly back to a communication problem with the workers at the site.  I witnessed our job supervisor explaining what was needed (in as good a Spanish as he could muster), the worker acknowledging his understanding, and hours later when the completed work is inspected, it's clear the worker did not understand exactly what was needed.  This has happened repeatedly, with some of the mistakes far more costly than others.”

When a customer experiences what Perry speaks to its not likely the contractor performing the work will ever get future business or referrals from the disappointed customer.  Remember, quality is not just determined by the final outcome.  Quality is also determined by the experience the consumer has as the product is being delivered.

#2: Risk of the government deciding they are employees 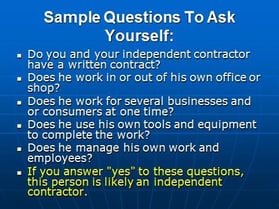 The IRS will consider a worker to be an employee unless independent contractor status is clearly indicated by the relationship between the worker and a remodeling business.   The way the IRS sees it an employee is a worker who performs services at the direction of an employer.  Subcontractors are considered to be in business for themselves and work under their own direction.  So simply stated anyone who performs services for a remodeler is an employee if the remodeler can and or does control what will be done and how it will be done.  Explaining things to a worker and orally directing how and in what order to perform their work therefore makes the worker an employee.

The fines and penalties for misclassification can ruin your business

As I pointed out in a previous blog post the determination by the government of misclassification of workers can be caused by many reasons.  Plus when it happens the government assumes you to be guilty until you prove your innocence.   If you cannot create a written subcontractor agreement, in the 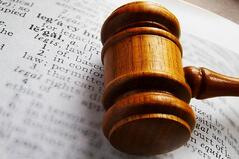 language of the subs you work with which details the scope of work they are to perform independently, you and or your business will be forced to orally direct the work of the subs.  Once you do that the government no longer classifies them as subs, but rather as employees.  That is therefore misclassification.   According to an article at workcompcentral, in Tennessee a company by the name of Aguilar Carpentry was caught misclassifying workers and was fined $73,000.  In another article posted to WTNH.com a CT contractor was fined $20,240 for misclassification. Those fine amounts would put most remodelers out of business.

Still unsure about your relationship with sub? Here are three possible options

For a quick answer perhaps just take the quiz Remodeling Magazine recently offered titled:  "Take the Quiz: Are You Misclassifying Your Subcontractor?"  Answer the questions honestly and then see if the government would call them subs or employees. 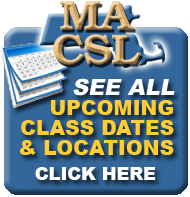 If you want help from the IRS and you have a lot of time to wait you can use IRS Form SS-8, Determination of Worker Status for Purposes of Federal Employment Taxes and Income Tax Withholding.   The completed form can be filed with the IRS by either the business or the worker. The IRS will review the facts and circumstances and officially determine the worker’s status.  Unfortunately it can take at least six months to get a determination.  Additionally, often times because determining factors used by the government are not always objective, the determination may not binding.