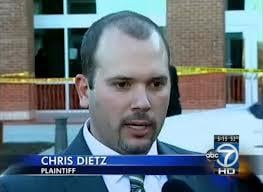 According to the news report filed with the video below, a local TV New Station said that the case is far from over and could change the way consumers criticize businesses on the Internet.  According to the report:

“Dietz says the situation has not only hurt his reputation, but cost him hundreds of thousands of dollars in lost business. He is suing Perez for $700,000 in damages. No word yet on when that trial will begin.”

In the video below Chris Deitz offers his point of view regarding the actions of Jane Perez who wrote reviews about Dietz and his work on Angie’s List and Yelp.  Jane Perez’s lawyer also comments.

According to the same report Yelp released the following statement:

"Consumer freedom of speech provides an important public service, protected by law. Yelp provides a valuable contribution to this dialogue by providing a two-way platform for consumers to share their experiences and for businesses to respond to their customers. Courts have consistently ruled that consumers have the right to share their truthful experiences. As a result, businesses that choose to sue their customers to silence them rather than address their comments, rarely prevail and often bring additional unwanted attention to the original criticism."

In my opinion the Yelp statement is a cover-your-butt attempt by Yelp.

The statement does not address the issue of reviewers posting outright lies about a business and causing unjust and often business killing consequences for that business.

Click here for links to updates and information regarding the Deitz lawsuit.