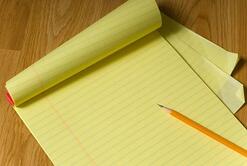 Many contractors start out estimating and learning how to estimate using what I refer to as the “Yellow Pad Method”.    Using paper and a pencil they can create estimates any time and on the fly.   However as the business grows, particularly when others take over the management and building of projects sold, the typical yellow pad estimate may not give the build team the information they need to build the project on their own.  Also, the information within the yellow pad estimate may not be in an intuitive and organized format, making it hard to find the information they need.

I came to this realization as I built my company and eventually formalized my estimating method and started using a better tool to get it done.   I learned at lot by attending training seminars, reading articles and plenty of trial and error.  In this blog post I’ll share a little about what I learned during the evolution in hopes it will help your estimating evolve.

I’ll even offer you a free copy of my recently updated Excel Estimating Spreadsheet Template.

Actually I think yellow pad estimating is the best way to learn how to estimate.   I say this because every time you do a new estimate you start out with a blank canvas.   This allows you to be creative and try new ways to estimate and organize your info each time you do one.  Using the yellow pad I learned how to do estimates in a variety of formats.   For example the information in the estimate could be listed in critical path order, the same order I promised my client and therefore wanted my production team to build it.  For another client I assembled the information room by room so they could decide what to do at a later date if the total cost came in higher than their current budget.

Using the yellow pad I could also do quick estimates for small projects on the fly.   This often allowed me to sell the job at the first visit as long as I could also easily write up my proposal ready for a signature.   That was back in the good old days when work was plenty and hand written proposals were the norm.

Eventually I became frustrated with many of the limitations of using the yellow pad to estimate.  Here is a brief list of what I ran into that motivated me to make the switch to using Excel spreadsheets instead.

Then I started using Excel to Estimate 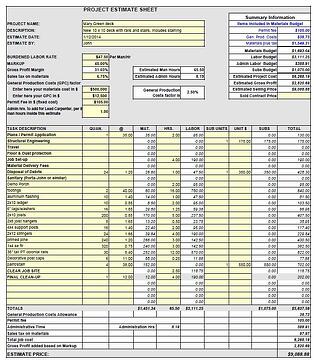 Eventually, after a lot of experimenting using the yellow pad I eventually incorporated what I had learned into an Excel Estimating spreadsheet I created on my own.   Doing so definitely improved the speed and accuracy of my estimating methods.  The end result also provided the majority of information the production team needed so they could build the job without me around, leaving me time to sell more work.

For more on how I advanced my estimating methods and how I used the Excel estimating template check out this previous blog post titled “Don’t Underestimate Your Estimating System’s Potential”.

Click on the button below to get my NEW UPDATED Estimating Template now!