Latest Survey on the Impact of the RRP Rule on Businesses

Latest Survey on the Impact of the RRP Rule on Businesses

On February 1st, 2012, Professional Remodeler Magazine released some information they collected from a December 2011 survey they did asking remodelers about how the EPA’s Renovation, Repair and Painting Rule (RRP) has impacted their businesses.   No surprise, the survey indicated negative impact.  64 percent reported they had lost business as a result of the rule.  What seems to consistently rise to the top is the impact of illegal competition from businesses that ignore the rule and its required work practices. 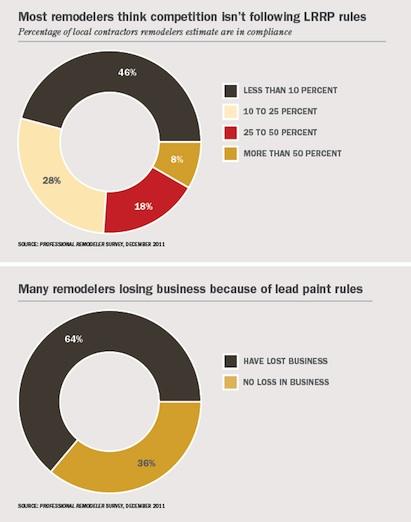 According to the excelent survey summary posted by the magazine’s Editor in Chief, Jonathan Sweet, 46 percent of respondents said less than 10 percent of remodelers in their local market are following the regulations and only 8 percent think more than half of their local competitors are in compliance.

The survey also asked about costs related to RRP.  The EPA says additional costs are $35 to $376, depending on the size and the nature of the project.   According to the survey results, 37 percent said the rule added more than $1000 to the cost of their average project and a full 81 percent said it adds more than $400.  So much for the accuracy of EPA’s estimates.

Again, the survey proved what many have already determined in the past regarding consumer awareness about the rule: very few know anything about it.   According to survey respondents, 65  percent of remodelers estimated that less than 10 percent of their potential clients are aware of the rule and only 5 percent think more than half of homeowners know about it.   This is despite what EPA refers to as extensive consumer outreach.

In summary, although the survey didn’t seem to provide any new information, its finding are still valuable.  It did demonstrate that EPA has made very little progress getting the regulated community into compliance and with educating consumers about the rule and the reasons for it.