We own a home built prior to 1978 and were planning to remodel it this year. A neighbor who owns a pre-1978 home and who has recently completed a remodeling project told us about the  new EPA Renovation, Repair and Painting Rule (RRP) that went into effect 4-22-10.  Then he showed us the Renovate Right pamphlet his contractor gave him and we learned about all the steps the contractor would need to follow to comply with this rule.  These steps added a lot of extra costs to our neighbor’s project and discourages us from moving ahead with any projects.  We are concerned that these additional costs may also cause a decrease in property values for us as well as others who own homes built before 1978.

From reading the pamphlet, we understand that this rule was put in place to protect children from elevated blood lead levels.  The pamphlet also says lead exposure can come from other sources, such as outside soil, water, and household items. Recent news stories have also warned us about lead found in toys.

We have included two charts below in the body of this letter.  The first is a chart from the Center for Disease Control (CDC) showing that the number of children aged six and under with elevated blood lead levels has decreased dramatically (87%+/-) in the years 1997-2007.  Although the number of children tested almost doubled during that period, these levels decreased for 10 years straight, all before this new rule was put in place.

The second chart is from a Harvard University Joint Center for Housing Studies report . It shows that during the same time period, remodeling spending activities more than doubled. 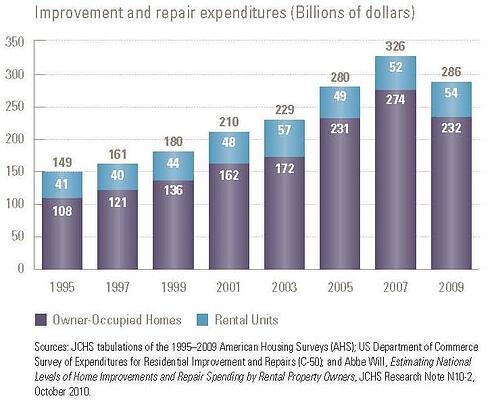 Considering that both charts include the same 10 year period (1997 – 2007), it’s obvious that the number of children with elevated lead blood levels decreased dramatically while remodeling activity increased steadily. Given these charts, wouldn’t it be equally valid to conclude that remodeling activities actually reduce lead blood levels in children under six over a 10 year period? If that is a ridiculous conclusion, we must ask what facts and figures were used to conclude that remodeling activities, and not other causes, were the major source of elevated blood lead levels?

This is a time when unemployment remains high and national debt is growing. Many small business owners and homeowners are struggling to stay employed and contribute to the employment of others. What justification can there be for mandates that create hardships for Americans without evidence that they actually accomplish their objectives? How is the cost of legislating and enforcing this questionable rule a good use of taxpayer money?  Nobody wants to stand in the way of keeping children healthy. However, in light of the decreased cases of lead poisoning, we question whether the dubious gains warrant the undeniable costs imposed on contractors and passed along to homeowners.

We have been unable to find any documentation that shows renovation, repair or painting activities to be the causative agent of lead poisoning among those children displaying elevated blood lead levels.  We request that you share any such data with us so we can better understand the reasoning behind, and even support, the RRP Rule.

In light of the facts we have shared in this letter, we request a timely response from you about your position regarding the validity and practicality of this rule.