While at the Remodeling Show last week in Baltimore a CT remodeler shared with me that his local NARI Chapter, The Remodeling Contractors Association of Connecticut, had e-mailed out information to its membership about how to report violations of the RRP Rule to the EPA.   The e-mail included a PDF form created by the Region One EPA office as well as a link on the EPA site that could be used to report violations.

Although every “legal” remodeler I have spoken to expresses concerns about illegal competition doing their work in violation of the RRP rule, these remodelers are split about whether to report their illegal completion or not.  At the Opening Session I presented on Thursday morning at the Remodeling Show I offered my point of view on this.   I suggested that illegal contractors and the home owners who hire them are stealing business and money away from legal remodelers and their employees.  I gave the example that if you or I steal a TV from someone and get caught, we must return the TV and suffer any consequences.   If an illegal contractor or home owner steals a deck job from a legal contractor little or nothing is ever done and the home owner gets to keep the deck.   How long will our industry and the trade associations that represent us tolerate this?   Just like with illegal immigration, because our government does not enforce existing rules and laws on a consistent basis, illegal contractors operate with little fear of being caught and even if caught, have little fear of any consequences.

The reporting of illegal contractors is every contractor’s choice.  In a recent survey I created for Remodeling magazine the following question was asked. 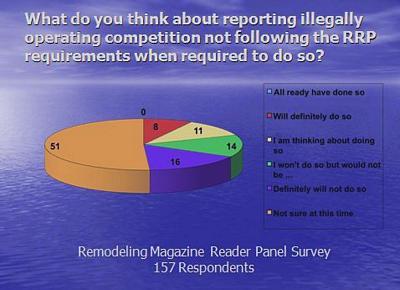 The survey was first sent out to the magazine’s reader panel.  157 people responded to the survey results shown above.  The numbers in the pie chart tell an interesting story.   Only 16% of those who responded indicated they would not report a contractor operating in violation of the RRP rule.   Just over half are still trying to decide.

As we all wait to see what happens with the economy and how long a real recovery will take, I predict that their ability to pay their mortgage and put food on the family table will persuade many remodeling business owners to take action and defend their ability to run honest businesses.

If you would like more information about reporting violations and violators, check out this blog by Mark Paskell of the Contractor Coaching Partnership.   Mark even offers to do the reporting for you without divulging your identity.