WHAT ARE THE SIGNS OF LEAD POISONING?

WHAT ARE THE SIGNS OF LEAD POISONING?

As like many of you, I have definitely exposed my body to lead over the last 30 plus years I have been involved in remodeling.   As I learn more about lead poisoning and the symptoms of lead poisoning, I flash back to my younger years working for my dad’s remodeling business.   Back then there was little awareness or thought given to the way we worked when disturbing lead paint.   One summer I remember complaining of stomach aches, muscle pains and constantly feeling tired even after having the weekend off.   My parents took me to the doctor but the doctor couldn’t find any reason for these symptoms.  He gave me a terrible tasting medication to take daily and asked me to report back on how I was doing.   The symptoms would seem to come and go all summer long, but then went away when I went back to college after the summer was over.  This same scenario played over again the following summer.

Later I found out from my parents that the doctor had told them my symptoms were psychosomatic.   He made this decision because the medication he gave me was only a placebo but I was reporting improved health.  Looking back what was actually happening was that I was moving in and out of exposure to lead as I was moved from one project to the next.  If I gutted a kitchen and remodeled it I would get sick and the symptoms would appear.  After completing that project I might move to an addition or attic renovation project where I would have little or no exposure to lead.  My symptoms would come and go as I moved from project to project and as my body had time to adjust. 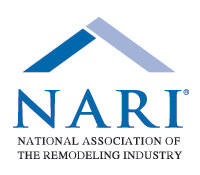 Fortunately for me, in the early days of owning my remodeling business, I learned a lot about lead and lead safe work practices through the NARI/HUD Lead Safe Remodeler training program that came out in the mid 1990’s.  The current Certified Renovator training is only one day and really only teaches attendees how to contain the dust and debris.  Different than the current class, the NARI/HUD class was two days long and actually thought us lead-safe work practices that eliminated or significantly reduced the creation of lead dust and debris.  Attending that class was definitely worth the investment of time and money.  Both I and my employees changed the way we thought about the work we did and the methods we used going forward.

Lead poisoning is a serious concern, often confused with other illnesses:

(Note: The following information comes from the Massachusetts Division of Occupational Safety, Publication: # 17379-13-200-7/93)

Workers can be exposed to lead by breathing in lead dust or fumes from work activities, by eating, drinking or smoking in work areas, or by handling contaminated objects - and accidentally swallowing lead dust. Workers in many workplaces have so much lead in their bodies that they are slowly being poisoned. The symptoms may hardly be noticeable at first. But over time, lead can damage the brain, blood, nerves, kidneys and reproductive organs. This damage can cause serious disability: memory loss, extreme tiredness, emotional problems, even kidney failure, coma or death.

Lead poisoning can occur when people are exposed to large or small amounts of lead over time. Lead builds up in the body and may cause temporary or permanent damage. A blood lead test can show whether your body has absorbed a dangerous amount of lead. A high blood lead level is an indication that lead is building up in the body faster than it can be eliminated.

There are many symptoms or signs that suggest a problem with lead, but they can also be symptoms of other illnesses. It is also possible to have lead poisoning without noticing any symptoms. If you work around lead you should regularly see your doctor, whether or not you are experiencing the following symptoms: 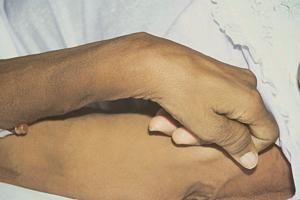 Note:  The Photo above shows wrist-drop in adult with lead poisoning and renal failure.

What to do if you have been poisoned by lead